Is investing safe and does it give a reliable long-term interest?

Yes, investing is safe and gives a reliable interest, but only when two conditions are met:

How do we know that investing is safe and gives a reliable interest when these conditions are met? What evidence is there for it?

We know this because of two reasons.

First, extensive stock market data are available from the past 150 years, among others a dataset compiled by Nobel Prize winner Robert R. Shiller. Two conclusions follow from these data:

Second, this is how our economy works. Economic theory dictates that in capitalism, you can earn ‘rewards’ (i.e., money) for two things: labor and capital. With labor the reward is a wage. With capital, the reward is profit. It is logical that lending out capital (which is what investing is) over long periods of time pays off on average. Otherwise, no one would lend out money or invest anylonger and the capitalist system would no longer work.

It is logical that investing over long periods of time pays off on average: this is how our economy works.

Can you give some more explanation of this available evidence?

Yes, with pleasure, because this evidence base is really important to us at Give For Good. The images below provide further insight into the data by Robert R. Shiller we introduced above. They were made using the data in this file, which builds on the dataset compiled by Shiller.

The images show the average annual return that you would have had if you invested in the market as a whole. Each image shows this for a different set of investment periods (the ‘investment period’ is how long you have actually held the stocks, if the period is in the past): 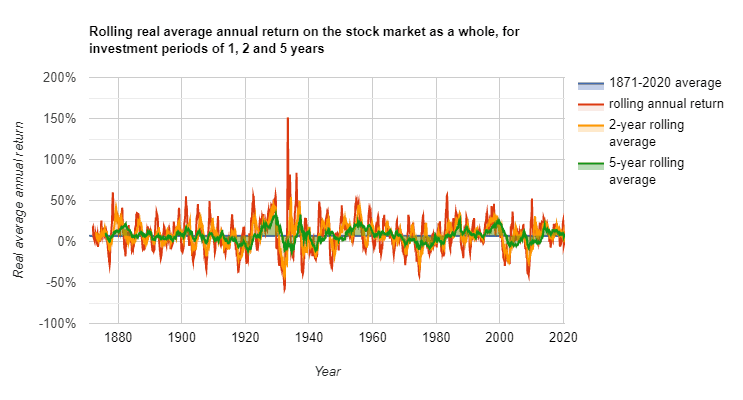 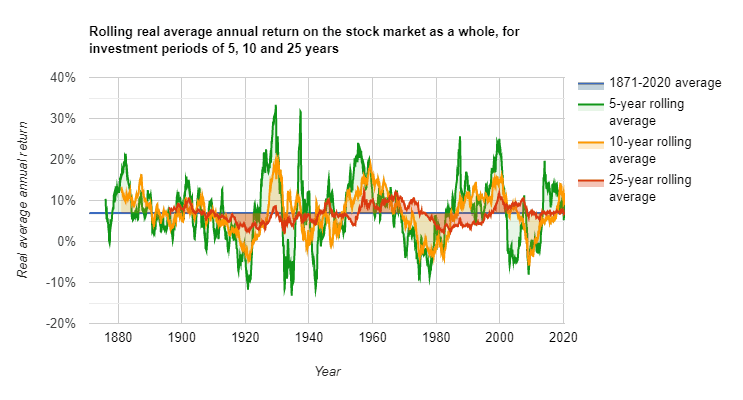 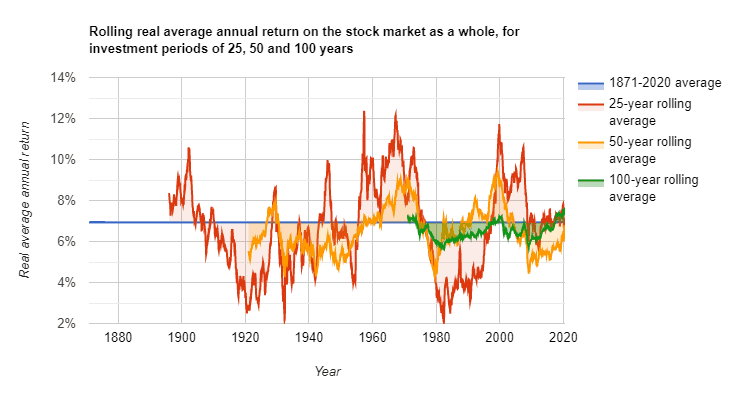 Source for these three graphs: data build upon Robert R. Shiller, Stock Market Data Used in “Irrational Exuberance” Princeton University Press, 2000, 2005, 2015, updated data, originally available from the Department of Economics at Yale university (here), also stored on our own website (here). Give For Good’s adaptations can also be downloaded from our website (here).

The lines are split into three graphs, as opposed to putting them all in one graph, to improve the visualization. ‘5 years’ and ’25 years’ are both in two graphs on purpose – we’ll get to that later.

The first thing to note from these three graphs is their x-axes. They all start in 1871. This is because from this year onwards, we have good stock data available. The lines are ‘rolling averages’, meaning that every month a new average was calculated for the 1, 2, 5, 10, 25, 50 or 100 years preceding it. That is why the larger the investment period, the later the line starts in the graph. The graphs include analysis of 1794 months in total between January 1871 and June 2020.

Secondly, note that the average annual interest in the past 150 years is 7.0%. Again, this is ‘real return’, meaning it is already corrected for inflation. The average uncorrected return is higher, 9.1% (the average inflation per year was 2.1%).

Thirdly, note that as the investment period gets bigger, the variance (‘variance’ means how much the line deviates from its average) around the average interest gets smaller (notice how different the y-axes are in the 3 graphs). If you invested for 1 year, if you started in precisely the right month, you would have made an interest of 151.3% (!). If you started in the worst month, you would have made -58.1% (meaning you lost 58.1% per year). Depending on the month and year in which you started to invest, you could get really lucky or unlucky. However, as the investment period grows, these numbers get smaller. With 5 years they are already 33.3% and -13.2%, with 10 years 20.0% and -5.9%, and so on.

Another way to visualize this is to take these best and worst average annual interests in history for each investment period. When you do that, you get the bar chart here below.

Note that for 21-, 25-, 50- and 100-year investment periods, regardless of the month and year in which you started to invest, the average annual return was ALWAYS positive. Source: data build upon Robert R. Shiller, Stock Market Data Used in “Irrational Exuberance” Princeton University Press, 2000, 2005, 2015, updated data, originally available from the Department of Economics at Yale university (here), also stored on our own website (here). Give For Good’s adaptations can also be downloaded from our website (here).

Note that there has not been a single (!) investment period of 21 years or more since 1871 — out of 1794 periods that were analysed, each starting in a different month — during which the average real return per year on the stock market as a whole was less than 0. This also matches with the line graph for this investment period above – it never dips below 0. If you had huge bad luck and you started investing in the worst month, you still had a positive return every year of 0.4% on average. If you were lucky, and you started out in the best possible year, you achieved a return every year of 12.9% on average.

So, the conclusion of all this data is: as long as you invest as diversified as possible (in the market as a whole) and have an investment horizon of more than 25 years, historically, investing in stocks is safe and gives an average return of 7.0% per year on average. The same calculations can be done for regular savings, this is also safe historically, but gives only an average return of 2.3% per year.

There has not been a single (!) investment period of 21 years or more since 1871 during which the average real return per year was less than 0.

Go back to the overview of all FAQs

The gift that keeps on giving